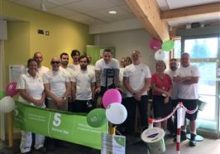 A National Star team proved they have what it takes to go that extra mile – all 875 of them.

The 35-strong Site Services department, based at Ullenwood, completed 48 hours of non-stop cycling on a static bike.

They covered the equivalent of 875 miles and raised more than £3,500 for the charity which supports young people with complex disabilities and learning difficulties.

Adam Hockaday, Head of Building and Site Services, slept on his office floor so that he could do the late-night / early-morning shifts.

‘I think I have had about five hours’ sleep in the past two nights but it’s all been worth it,’ said Adam.

‘The team has really pulled together and our contractors and suppliers have been so very generous – though I must admit we are all a bit shattered!’

The Site Services team is responsible for all the maintenance and construction of the charity’s campus in Ullenwood, as well as its day facilities in Hereford, and residential developments in Cheltenham and Gloucester.

Adam chatted to BBC Radio Gloucestershire about the challenge (interview starts at 46.44).

People can still donate by visiting the team’s fundraising page.