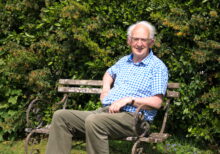 A trustee, who has dedicated 31 years’ service to National Star, says it has been a privilege to be part of such a success story.

Shaun Parsons joined National Star as a trustee in 1989. He has seen the charity become one of the best known in the UK and beyond for its work and support of young people with complex disabilities. Last year 496 young people benefitted from National Star education and personal development programmes.

He was chair of the trustees from 2008 to 2013 during one of the charity’s most challenging periods and initiated significant governance and operational changes, which enabled National Star to develop to become the charity it is today.

‘It has been a great privilege to be involved in such a successful and rewarding charity. It is wonderful to see how National Star’s team of dedicated professional staff give young people the confidence to become active and equal citizens, and that makes it such a unique place and deservedly recognised as such,’ said Shaun.

‘When I became Chair it was going through a tough financial period, and its income was £13.7m. Last year this has grown to £30m and National Star remained open to care and support some of the most vulnerable young people throughout the pandemic. An incredible achievement.’

Mr Paul Styles, Chair of the Trustees, paid tribute to Shaun and his willingness to give so freely of his time and his efforts.

‘Shaun joined the organisation shortly before me so we have both seen the organisation change enormously. He has always been meticulous regarding his duties as a Trustee and he has sounded notes of caution at various times when matters were less settled than they are now. His sense of caution and commitment have served National Star well and we wish him well in his retirement.’