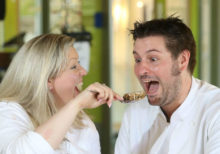 The winner of a charity cake-making competition used her first precious ‘baby-free’ time to make flowers to decorate her creation.

New mum Danielle Curtis, who won Lumière’s Cake Off for National Star, made her first-ever sugar flowers whilst baby Poppy, who is one next month, was at a nursery taster session.

The judges were astounded with her vanilla sponge cake with homemade lemon curd and raspberries and cremant butter cream which was decorated with mirror glaze and homemade sugar flowers. They awarded her the overall prize and earlier, the adult large cake prize.

Helen Howe, co-owner of Lumière, said: ‘Danielle had had the house to herself for a couple of hours but instead of putting her feet up or having a bath she handmade sugar flowers. Her presentation was beautiful and the cake tasted absolutely delicious.’

The winning cake was far from the only surprise at the competition which saw 26 entries and raised around £700 to help National Star support young people with disabilities and acquired brain injuries.

‘When Chloe comes over to visit she’s always in the kitchen with Jon, watching him,’ Helen says. ‘I think we have a future cook there – although I’m told my nephew was wearing as much flour as went into the cake.’

Jon was one of the panel of judges at StarBistro, on National Star College’s campus in Ullenwood, along with TV GP Dr Dawn Harper and Jack Harries.

Terresa Aubrey’s jam tarts were a hit with the judges who were giving marks out of 50, scoring on taste, presentation, texture and proportions.

‘I would have been able to tell because there’s something special about your mum’s cooking. Jon said her pastry was amazing.’

A family of youngsters baked for the competition and cousins Bethany Masters, age six, and Madison Coleman, 10, won the family small bakes category with their ‘beautiful and delicious’ pink and blue cupcakes, lavishly decorated with marshmallows and hundreds and thousands. The young boys in the family may have done well but no one will ever know as the youngest ate their entry.

‘The judges had such a difficult time, there were so many great cakes and you could see them going back and forth trying to decide. The standard of entries was very high, everyone put in so much effort,’ said Helen.

‘National Star is an amazing charity, they give all their students an A* experience but they need a lot of funding to do that. Eating cake is a good way to support them.’