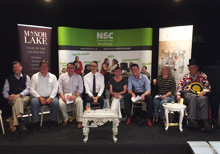 Yesterday (22 April) more than 40 National Star College learners grilled General Election candidates about the freedom of choice for further education and disability rights. The hustings was hosted by Manor on the Lake in Cheltenham.

Chaired by Gloucestershire Echo political reporter Jack Maidment, seven candidates standing in Gloucester and Cheltenham discussed if the age of voting should be lowered to 16, their party’s plans for the NHS and disability benefits.

Martin Horwood pledged to campaign to establish national level funding to ensure young people with disabilities were able to access specialist colleges such as National Star. At present learners are funded by their local authorities.

‘I would like to stand up for specialist provision and to make sure no one is without the specialist education that National Star provides and the difference it can make,’ he said.

Alex Chalk said the Children and Family Act has given people with disabilities ‘a legal right to any state-funded school or college’ and praised National Star for the standard of education we offer.

Jonathan Ingleby argued that the new Children and Family Act was ‘good in theory.’

He said, ‘A recent survey on National Star’s website shows that people are not aware of what is available to them and people are not getting what they should.’

When questioned about disability benefits, Richard Ford said UKIP ‘believe in disabled people’ and pledged to increase the carers’ allowance. ‘We believe in diversity and in our young people,’ he said.

Sophy Gardner said Labour would overhaul capability assessments. ‘No one should suffer hate crime because they are on benefits,’ she said.

Sue Powell said it was important to give people with disability their own voice. ‘People should not feel that they are having to beg or get handouts when they have a right to a decent living.’

George Ridgeon encouraged the learners to vote for what they believed in.