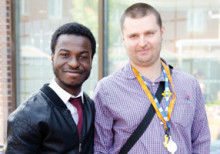 Ofsted has praised National Star for its programmes to support young people with disabilities into work.

Our Steps into Work Supported Internship was singled out for its ‘exceptional links’ with employer EDF Energy.

National Star was included as a case study in Ofsted’s report ‘Moving Forward?,’ which investigated the implementation of the Children and Families Act 2014, and the impact it has had on the lives of learners with high needs.

The report reinforced the findings of a survey carried out by National Star last year – that funding reforms and new legislation have created a postcode lottery for young people with disabilities.

In the survey, 87% of the 1,600 parents from England and Wales who have teenagers with disabilities have no idea how Local Authorities are making decisions about their child’s future.

In its new report, Ofsted is critical of the advice given to high-needs pupils by schools and Local Authorities and the lack of detail available to post-16 providers about the pupils they take on.

Ofsted visited 17 providers and spoke to 1,600 young people between January and March 2015. They found that many, particularly those with more complex or profound learning difficulties or disabilities, had received ‘insufficient information’ about the full range of opportunities to them.

The report warned that schools often recommended a post-16 provider within easy reach and where they had established working relationships, rather than ‘considering individual learners’ educational and support needs, interests and aspirations.’

Ms Kathryn Rudd, Principal of National  Star College and Chair of the Association of National Specialist Colleges, welcomed the report.

‘Ofsted have highlighted the concerns we have been raising on behalf of students and their families. They are exhausted and frustrated by a system which they believe doesn’t give them the range of information they need to make informed choices about their son or daughter’s education, and which often refers them to local provision which doesn’t have the specialist support required.’

The report comes more than three years after Ofsted warned, in its August 2012 report on progression of high-needs learners, that schools, Local Authorities and other agencies did ‘not work together sufficiently well to ensure that learners were adequately prepared for transition between school and post-16 provision.’

Ofsted praised specialist independent colleges and some specialist providers which offered more holistic support and ensured there was a strong emphasis on life skills and real work place experience.

It stated that the established independent specialist colleges inspected had good access to specialists, including speech and language therapists, physiotherapists and occupational therapists.

They had developed excellent links with these specialist agencies and were skilled at combining the services they provided for different learners to save staffing costs.

The report also states that learners on the autistic spectrum significantly improved their independence and social skills by living in a dedicated residential facility. Alongside their college course, they took part in community activities and undertook supported external work experiences.

To find out more about Steps into Work’s Supported Internships please click here.