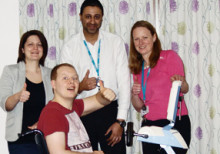 A fundraising project by Ontic Engineering & Manufacturing is helping young people with disabilities go from strength to strength.

When the Cheltenham-based company heard that National Star’s Foundation House needed a special exercise bike for residents, they leapt into action.

Ontic applied for £6,600 from its parent company BBA Aviation to pay for the Therabike.

It was chosen as one of the award recipients of the company’s charitable giving programme, which allows employees to apply for funding for a donation on behalf of a registered charity they have links with.

Members from Ontic visited Foundation House in Gloucester to see for themselves how the bike is helping.

They met Jon Veal, who moved to Foundation House after he finished at National Star College.

The 25-year-old uses the bike as part of his exercise and rehab programme. Jon received a brain injury and serious physical injuries in a car accident at the age of 19.

‘The Therabike has a real benefit for Jon and others living here. They can use the bike while watching TV – a definite bonus – and work on increasing muscle strength and improving circulation,’ said Gareth Tindell, nurse practitioner at Foundation House.

‘National Star was chosen for the BBA Charitable Giving application because Ontic has built strong links with the college since 2012 and stories like Jon’s demonstrates some of the challenging work that the college does,’ said Kalpesh.

‘The Ontic team is very happy to support such a worthy local charity.’

Our specialist staff improve learners’ abilities to communicate, focusing on their physical health through occupational therapy and physiotherapy, as well as providing personalised education and helping them develop the skills they need for independent living.