Our Voice to Live conference comes to National Star 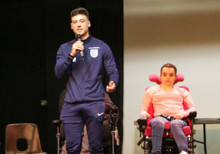 Young people with disabilities from across Gloucestershire joined together to make their voices heard about what is important to them.

They took part in the Our Voice to Live conference organised by the county charity Allsorts and staged at National Star in Cheltenham.

They spoke out about the things that concerned them: finding work, finding a place to live, further education and the chance to socialise with their peers.

The special guest was Jack Rutter, from Gloucester, who was captain of the GB Cerebral Palsy Football Team in the Paralympics.

It is the third year Allsorts – which supports families across Gloucestershire who have children with disabilities and additional needs – and National Star have supported young people to run the conference.

Four young adults, including former National Star learners, shared their experiences with the young people and talked to them about what life was like after school.

Lettie Tongue, from Cheltenham, who works part-time for Allsorts, was one of the organisers of the event.

‘It’s really important for young disabled people to have a voice because it’s their life, they have a right to say how they truly think and feel and they should be able to decide for themselves what they want out of life,’ said the 25-year-old, who has cerebral palsy.

‘For me it was especially when I talked to social services and people who are supposed to look out for me – they weren’t truly listening or hearing what I was saying. They’d look at my notes but never ask me questions. Sometimes when they left I’d cry.

‘I want to tell them there’s a person behind this disability. But does what I say really count? Disabled or non-disabled, we all have a right to be heard.’

Lettie has also taken part in our Steps into Work Supported Internships programme with EDF Energy.