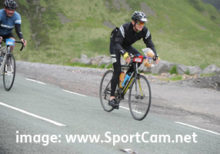 Peter Freeman maintains that his punishing challenge across the SAS’s training ground was not as difficult as seeing his teenage daughter in intensive care – but he had no idea what he’d let himself in for.

The weather unleashed its full force upon the Brecon Beacons and cyclists were blown off course as the St Albans dad struggled to keep his bike upright in fierce crosswinds – but his thoughts were on raising money for National Star, which helped his daughter after a car crash left her with serious head injuries at the age of 17.

‘The weather was brutal,’ he said. ‘On Saturday at the summit of the Black Mountain, visibility was about 10 yards in the rain, and bikes were being blown across the cycle racks by the wind.’

On the second day of his three-day challenge, Peter, from St Albans, ended up off-route and forced to seek shelter until the organisers were able to guide him back on track.

By day three, cyclists were dropping out; only 300 entrants out of 6,000 braved the conditions for all three days. But with the winds still howling, Peter completed a shorter route on the third day – raising £1,895 for National Star.

The family’s lucky mascot – Julian Bear – accompanied him. The bear sat on his daughter Nicki’s pillow for a month whilst she was in intensive care after a car accident in May 2010.

Nicki had to be cut free when she crashed as she drove to her prom in heavy rain. She was left in a coma and the brain injuries she suffered were so bad she had to learn to walk again. Seven years later she is still recovering.

But Peter says three years spent at National Star helped her regain her confidence and independence after they had feared the worst.

‘We had no idea if Nicki would ever wake up after the accident,’ Peter remembers. ‘When she did she had to learn to do everything again, just as she had as a newborn baby.

‘National Star’s focus on the individual’s needs and what they can do, not what they can’t, helped us maximise the outcomes for Nicki. Thanks to them, Nicki is now living in her own flat and finishing a BTEC qualification at Oaklands College.

‘National Star has changed the life of thousands of young people with disabilities for the better.’

Peter’s challenge, which started as a 500k cycle and up over 6,000km before the weather hit, was his thank you to the charity.

‘In 57 years I have never stayed out in such brutal conditions. I have walked in Wales and the Alps, and I’ve never been mad enough to go out in that.

‘Getting off the bike at the end was definitely a highlight – and the organisers giving Julian Bear his own medal, which Nicki is delighted with; not least as I wasn’t giving mine up!’