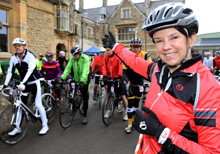 Yesterday (26 April) cyclists joined TV celebrity Dr Dawn Harper and Paralympian James Brown as they tackled the Cotswold hills as part of our Star Cycling Challenge. More than 100 cyclists set off on the 100km and 50km routes from our Ullenwood  site. The event is expected to raise more than £10,000 for National Star.

Double gold-medal winning Paralympian cyclist James Brown, who is partially sighted, rode with pilot Neil Rutter, using the 100km challenge as a practice session.  James is aiming to be the first partially-sighted cyclist to compete in a championship event on a solo bike without a sighted tandem co-pilot.

‘This is such a great event that goes from strength to strength,’ said Dr Dawn Harper. ‘National Star is amazing for what they do with young people. Now its Fundraising team has turned this challenge into a high-profile cycling event.’

Four members of the same family headed up their company’s team. Alan Smith, company director of Smiths (Gloucester) Ltd, provided support for their team of 16  while daughters Rebecca, 24, and Lisa, 21, and son Paul, 26, got on their bikes. National Star became Smiths’ chosen charity in 2012.

Rebecca, personal assistant to her father, said: ‘We are all so busy and we don’t get to spend a lot of time together as a family so this will be nice.

‘National Star is quite unique and it’s amazing to see it in its full glory, to go in the classrooms and hear about everything they do.’

‘We are working on the new Pittville development for National Star so it’s great to take part to support one of the biggest local charities,’ said Kevin Bloxsome.

‘National Star is fantastic and we’re really pleased to be able to help out,’ said Karen Holmes, customer services manager at Pulsin.

‘I used to cycle a lot but I haven’t done any for a while so it might finish me off but when I think about how determined some of National Star’s students I want to push myself.’