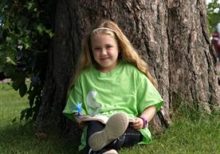 The St Edward’s School Year 3 pupil has so far raised £80 with her personal readathon.

‘I want to raise £100 so I am almost there. Grandad helped me pick out six books to read and so far I have read four,’ said Lily.

Lily’s mother Olivia works for National Star, a charity based at Ullenwood which supports young people with complex disabilities and learning difficulties to achieve their goals.

‘I really would like people with disabilities to get the chance to do things that everyone else does,’ said Lily, who lives in Cheltenham.

One of her favourite reads of the summer was The Story of Tracy Beaker. Lily says she read during her holiday and at bedtimes.

‘If I am not tired I read a bit and then it helps me go to sleep,’ she said.

To ensure she reaches her target before returning to school Lily is reading at least an hour every day.

‘We applaud Lily on her efforts. Without the support of the community we couldn’t provide the standard of facilities that we do and to support young people with disabilities.’

People can support Lily at her online fundraising page.