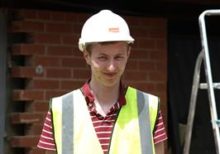 Shane Cotterill never imagined that a casual chat would lead to his first ever pay packet.

The 20-year-old, who has learning disabilities, is a supported intern with National Star’s Steps in Work programme, based at Wessington Farm.

Since National Star bought 1 Ledbury Road in February, the supported interns have been working in the garden keeping the site tidy.

In May Barnwood General Works started major refurbishment of the bungalows on the site to convert them into long-term living accommodation for seven young people with disabilities.

During a conversation, Gary learned that Shane’s dream was to be a labourer. So with the support of tutor Jonathan Whittall, arranged for Shane to volunteer on the site for a couple of mornings.

It was a huge success. Shane loved the work and did so well that Barnwood agreed to start paying him and build up his hours.

‘Shane is brilliant. He’s working hard. He makes us giggle with some of the stuff he comes out with but he is also learning by working alongside the trades,’ said Gary.

‘We’re doing our best to encourage him into life and see what he wants to do in the future and this is a stepping stone which I thought would help him.’

‘I was over the moon when I was offered the job. My friends think it is good and the experience I get from it will help me in the future,’ said Shane.

‘The best thing is the people working here. They know what they are doing and I am learning from their experience. I like the socialness and the talking and having a laugh.’

His tutor Jonathan Whittall said Shane and Barnwood are a perfect example of what can happen with National Star works with employers and students.

‘Shane has come a long way from not understanding the world of work to learning what work is all about, about being part of a team and following instructions,’ he said.

‘Our main goal is to get students into paid employment. We have a job coach who stays with them until they are completely settled and we work with employers to carve the jobs in a way to ensure they succeed.’

1 Ledbury Road will become National Star’s base in the county. The charity plans to open the bungalows in the Autumn. The main building will be converted into an education facility that includes therapies and personal development.

To find out more about the Steps into Work Supported Internship in Hereford phone 01242 527631 / 07801 374253 or email steps-enquiries@nationalstar.org or go to: www.nationalstar.org/wessinternship