Ski champion Ed Stephens had one dream after his accident 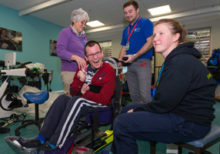