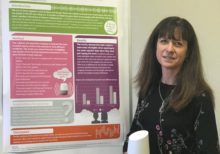 Members of the Speech and Language Therapy (SLT) team at National Star are set to share the results of a small study exploring how smart speakers can help people with disabilities improve the clarity of their speech.

In the recent study some National Star students with dysarthria (the medical term for having unclear speech) appeared to subconsciously speak more clearly when talking to a smart speaker, rather than when they merely said the same word out loud.

It appears that often just the thought of speaking as clearly as possible so that a smart speaker can understand what is being said is beginning to help students improve their speech intelligibility.

‘The use of smart speakers, such as Alexa and Google Home, has rapidly increased in recent years with one in 10 people in the UK using one. A number of research papers have shown that people with disabilities can use smart speakers to become more independent,’ said Ashleigh, who has worked in the Speech and Language Therapy team at National Star for more than 20 years.

‘The results of our study, although small, are galvanising multi-disciplinary teams at National Star, to think even more creatively about the use of smart speakers as therapeutic tools,’ said Ashleigh.

‘For example, one student who is trying to improve his speech clarity when talking to members of the public is now prompted by his Occupational Therapist to speak in the same way as he would to his smart speaker. This is resulting in him beginning to be better understood and is hugely rewarding for the student who is motivated to make further improvements in his speech clarity.’

The 14-strong SLT team at National Star are experts at supporting people with disabilities to develop their communication skills. Communication is embedded across the curriculum and within students’ residences.

National Star prides itself on using available technology to enable students to reach their full potential. The charity has established a Technology Fund which funds technology projects and other life-enhancing technology which enables young people with complex disabilities to have a voice, access learning and control their environments. You can donate to the Technology Fund here. To find out more about the Technology Fund please contact the Fundraising team or call 01242 524478.