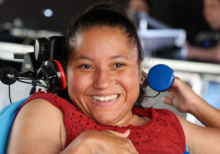 Chelsea, with the support of her parents, staged an afternoon tea and cake event in the family garden.

The total from the afternoon event, along with Chelsea’s GoFundMe page, added up to £1,115, smashing her £500 target.

Chelsea is starting her third year as a residential student at Ullenwood and is the new Student Union president.

‘I feel what I did (by raising money) was not just helping the other students and myself but the next generation of highfliers,’ said Chelsea.

‘Chelsea has achieved far more than we could have envisaged since starting at National Star,’ said her parents Alison and Barbara. ‘She is more confident and independent, and this will improve her prospects well into the future.’

National Star is building a new specialist residence at Ullenwood. The £6 million project, which started in July, will provide specially adapted accommodation for young people with disabilities that fully meets their complex needs and provides stimulating spaces to live, learn and relax.

You still have time to donate to Chelsea’s GoFundMe page.