Students to pay tribute to Stephen Hawking at memorial service 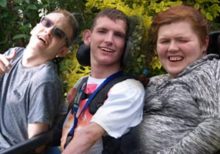 Jason Felce, Jack Smith and Rose Brown all use electronic communication devices to enable them to speak, just as Professor Hawking did.

‘Professor Hawking was the first person I ever saw using a electronic communication device,’ said Jason, aged 20, who controls his communications device with his eye movement.

‘He has inspired me to be the best that I can be and not let anything – including my disability – hold me back.’

The trio are all students at National Star College. They have been invited to attend the memorial service at Westminster Abbey on Friday (15 June) where the ashes of the physicist, who died on 14 March at the age of 76, will be interred between the graves of Sir Isaac Newton and Charles Darwin.

Jason was born with cerebral palsy. His family were told that, if he survived, he would not be likely to do anything in life.

He is in his first year of college at National Star and hopes to be a DJ.

Rose Brown, aged 20, is studying drama at National Star. In 2009, at the age of 12, Rose was hit by a drink driver who mounted the pavement, running into a group of walkers. Two others died in the accident.

‘I got a brain injury following a hit and run accident,’ she said. ‘I can’t walk and talk. I communicate using a computer which I control using a switch and moving my head.

‘I am going to be an actress. Everybody who puts their mind to something gets to be it. Stephen Hawking proves this more than anyone.’

Jack Smith was seven when he was struck by a car on a crossing, receiving a brain injury. His family was told that it would be a miracle if he survived, let alone achieve anything in his life.

The 21-year-old uses an electronic device to speak which he controls by typing with his hands. He is in his second year at college studying sport.

‘Professor Hawking was most famous for his science and the fact that he used a communicator is second,’ said Jack. ‘He’s been a huge inspiration to me.’

Professor Hawking was a supporter of National Star and his daughter Lucy is Vice-President of the charity.

‘The opportunity for students and staff to attend the memorial of Professor Hawking is a once in a life time opportunity, for which we are extremely grateful,’ said Emily Harris, Speech and Language Therapist at National Star.

‘He was a role model and advocate for people with disabilities, and specifically people using communication devices. He is a positive example for us all of how you can contribute to society in a positive way, be a pioneer and leader in your field regardless of disability.’