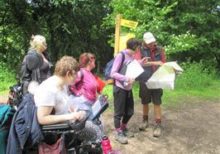 Three National Star students are proving disabilities are no barrier to achieving gold.

Lowri Harper, Kathryn Marygold and Zoe Barnes will receive their Duke of Edinburgh’s Gold Awards at Buckingham Palace next week (22 May).

They will join National Star tutor Richard Brand, who has been invited to the royal event in tribute to his 30 years as a DofE Award coordinator.

Kathryn Marygold, 22, has Worster-Drought Syndrome, a type of cerebral palsy that affects the muscles around the mouth and throat, as well as epilepsy and autism.

‘When I first asked about the DofE awards I was told that I couldn’t do them because of my disabilities. Then at National Star they said I could and I wanted to prove that I could,’ said Kathyrn.

Lowri Harper, 23, who has Down’s Syndrome, was born with two holes in her heart. As a baby she was very poorly and spent a great deal of time in hospital.

She started her Duke of Edinburgh’s Awards at National Star and has completed all three levels in just three years.

‘We’re immensely proud of her,’ said her father John. ‘Our aim is for her to become as independent as possible and the Awards programme has helped her confidence.’

Zoe Barnes, 22, left National Star in July and is currently a student at a mainstream college where she is getting merits and distinctions for all of her assignments.

Zoe, who has cerebral palsy and uses a power chair, believes she wouldn’t be achieving what she is now without National Star and taking part in the Awards scheme.

‘It has helped with teamwork, commitment and self-discipline,’ she said. ‘It made me push myself and I felt out of my comfort zone. I really enjoyed it and am proud of myself.’

The last time Richard Brand was at Buckingham Palace it was as an 18-year-old receiving his own gold DofE Award.

For the past 30 years he has been a DofE programme coordinator, helping scores of young people complete the scheme. At National Star he has enabled 50 students with disabilities achieve their awards.

He will attend the ceremony with fellow National Star staff member Lauren Shepherd who helps with the DofE programme.