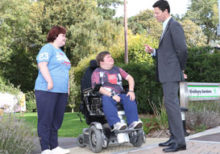 National Star students raised their concerns about accessibility in Cheltenham when they met the town’s MP.

Holly Holmes, a second year student, told Mr Chalk that during a walk from Sainsbury’s to the Regent Arcade she had counted 14 shops that were not accessible to wheelchair users or people with mobility issues.

Mr Chalk invited the students to let him or the council know which shops are not accessible, and what steps need to be taken.

‘My experience is that most shops and businesses want to do the right thing. If we can assist them with helpful suggestions, I would hope and expect them to respond positively,’ said Mr Chalk.

Michael Herbert told Mr Chalk that motorists parked on dropped kerbs are making it difficult for wheelchair users to move easily around the town.

‘It’s the height of selfishness to park by dropped kerbs. It’s common sense that those kerbs are there for people with disabilities,’ said Mr Chalk.

‘In a town like Cheltenham which has such strengths and expertise in terms of people with disabilities I would expect people to hold themselves to a higher standard.’

He has promised to investigate the issue and report back to the students.

Students also asked about fully accessible toilets with changing tables and about the condition of pavements in town and if they could be fixed.

Holly said the students felt that Mr Chalk had listened to their concerns.

‘I felt he was really genuine when he said he wanted to help us and I feel that he is going to try his best,’ said Holly, age 19.