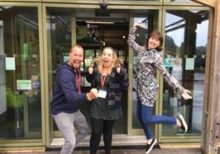 The Coventry Building Society entered into a charity partnership with National Star almost two years ago and the relationship is flourishing.

It is the enthusiastic and committed staff at the building society’s call centre at Gloucester Business Park who passionately support National Star.

They have baked, dressed up and down, run quizzes, held an auction of promises, walked on fire and put their hands in their pockets in support of young people with complex disabilities. Their passion and energy is infectious and they have thrown themselves into every project they have embarked upon.

The Coventry team is always the first to pick up the phone to volunteer to help with a bucket collection, even donning green glitter wigs to help collect donations from racegoers attending this year’s National Hunt Festival. Effective corporate support extends beyond traditional fundraising and the Coventry Building Society team has proved they want to help in other ways, by donating their time as well as their cash.

They spent a day volunteering to spruce up National Star’s StarGlamping pods. They also invested time to understand more about the issues facing students with disabilities, improving their awareness and challenging stereotypical thinking.

‘I am delighted that the hard work and dedication of the Coventry Building Society team has been recognised,’ said Partnerships Fundraiser Sally Gillespie.

‘It’s been an incredible year of volunteering, fundraising and fun. The team give so much time and commitment to supporting National Star – it’s far more than a typical corporate partnership relationship. I’m immensely proud of all they have achieved.’

Sophie Palin, Mortgage Underwriter at Coventry Building Society, and one of the key charity fundraisers said: ‘We were overwhelmed to find out that we had reached the finals of the awards. Working with National Star over the last two years has been an absolute pleasure. We can’t thank Sally and the staff at National Star enough for nominating us for the award. The work they do for the local community is inspirational and we look forward to continuing our fundraising for them.’

As one of four finalists in The Jelf Award, Coventry Building Society will have to wait until 19 September to see if they have won the overall award. National Star will receive a donation of £1,000 if the team is crowned overall winners in their category.