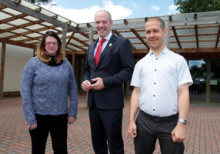 National Star’s Supported Internship programme is getting almost twice as many people with disabilities into paid work than the national average.

‘Steps into Work is a fantastic programme for young people with disabilities, providing real tangible opportunities which lead on to meaningful employment. It’s inspirational projects like this that will help us to halve the disability employment gap and change attitudes towards disabled people,’ said Mr Tomlinson.

Steps into Work, which has been running since 2014, has seen 83% of its interns going on to paid employment.

The Minister, during a visit to National Star at Ullenwood in Cheltenham, spoke to two Steps interns who after completing the nine-month programme were employed by EDF Energy.

Sophie Mills, from Cheltenham, told the Minister that her job at EDF Energy ‘means everything to me.’

‘I was diagnosed with autism at the age of 22 and previous jobs were just not sustainable for me,’ said Sophie, who works as an admin assistant at EDF Energy at Barnwood, Gloucestershire.

‘Before I got on to Steps into Work I just sat at home. This job has given me a purpose, a reason to get up in the mornings.’

By the time they are 26, people with disabilities are four times as likely to be unemployed as non-disabled peers.

A national Ofsted report recently praised the Steps into Work programme which is run in partnership with EDF Energy in Barnwood in Gloucestershire and Exeter.

Research carried out by Gloucestershire County Council shows that for every £1 invested into the Steps into Work programme there is a social return of £5.10.

‘Don’t allow the fear of taking on a person with disability turn into apathy. It often takes small steps to integrate people with disabilities into your workplace.’

Click here to find out more about Steps into Work’s Supported Internships or contact our Director of Personalised Development on 01242 527631 ext. 3749.