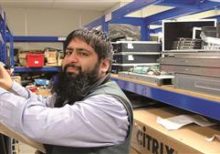 Learners who face the closure of their academy have been thrown a lifeline of supported internships nearby.

National Star in Hereford hopes to help young adults who are taking courses at the Robert Owen Academy and will lose out when it closes in August 2018 because its funding has been withdrawn.

The charity’s Steps Into Work internships at Wessington Court Farm, Woolhope, support people aged 16 to 25 who have an Education, Health and Care Plan into sustained work. It’s hoped they can provide the students with a stepping stone.

Oliver Sandell, National Star’s Recruitment, Assessment and Funding Coordinator for Steps into Work said: ‘Our internship at Wessington Court Farm would be ideal for young learners who are leaving the Academy in the summer.’

Wessington Court Farm Steps into Work delivers supported internships across the county. They support people aged 16 to 25, who have an Education, Health and Care Plan, into sustained work.

Each intern has a personalised programme and is supported by a tutor, job coach and host employer to help them achieve their aspirations.

They learn transferable skills such as personal organisation, time management, teamwork and communication before these are taken out to employers in areas the young person would like to work in such as retail or catering.

Interns can also complete vocational, English and maths qualifications. At the end of the one-year programme, interns can research and apply for jobs. Last year 59 per cent of interns took paid work after completing the course; the rest took on voluntary roles.

The Regional Schools Commissioner for the West Midlands wrote to The Robert Owen Academies Trust saying it will stop funding on 31 August. The trustees have vowed to keep the Academy open until the end of the summer term.

Find out more about National Star’s Steps into Work’s supported internships or telephone 07837 555329.