Teacher to take on Ride London for National Star 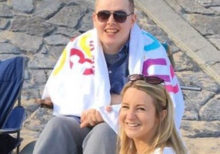 A primary school teacher is getting on her bike to say thanks to National Star for supporting her cousin.

Lynne, who cycles about 3.5 miles every day to work, says the ride on Sunday (30 July) will be a challenge.

‘A friend bullied me into the challenge,’ she said. ‘I have been following a training programme but I think I am going to have a rather sore bottom by the time I finish!’

So far Lynne has raised £830 in sponsorship. To donate, visit her fundraising page.