Technology enables student to play Minecraft with his eyes 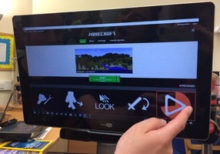 A National Star College student has wielded a sword and flown through a virtual world as he helped test new technology which allows him to play Minecraft with his eyes.

Ian Clements has Dystonic Cerebral Palsy which affects his mobility and speech and had never played a computer game before the trial. He communicates with eye gaze technology, using eye movement to move the cursor on a computer – similar to that used by Professor Stephen Hawking.

He has been one a group of young people involved in a project with the charity SpecialEffect to create software which allows people to play Minecraft by using eye moments rather than a joy stick.

For Ian, who is aged 20 and is from Bristol, the new software means he can experience movement – from walking to flying – in the virtual world. He was only one of three people in the country involved with the testing of the software.

‘I was shown Minecraft and wanted to have a go,’ said Ian. ‘I tested it out and my personal assistant helped iron out the glitches.’

Ian has worked with SpecialEffect for several months. He explains how it works: ‘I stare at the menu bar to get the correct tool and then look into the Minecraft world and start mining. I love attacking walls and animals with my sword.

‘Before using Minecraft I had never played a computer game. It is great fun. I think it’s great as it enables me to play. Why aren’t more games like this?’

‘It has opened a new world to Ian,’ said Simon, who is Ian’s tutor at college. ‘We want to make this available to every one of our students so that they can experience that freedom in the virtual world which they may not be able to experience in the “real” world.

‘Ian loves the game and his playing skills have developed quickly. Technology can change the lives of people with disabilities. All it needs is some innovative approaches as to how to make it accessible.’

Dr Mick Donegan, CEO from SpecialEffect, said, ‘For us, EyeMine represents a watershed development. It’s a flagship example of taking the experience we’ve gained through our one-to-one work with gamers with the most severe physical disabilities and translating it into a means of helping a huge number of people on a global scale.’

National Star College is hosting FestABLE, the country’s first national festival of specialist learning on 2 June. Young people will have the opportunity to try the assistive technology, including eye gaze and switch systems and the UK’s only wheelchair accessible hot air balloon will be tethered in the grounds.

Carers, support workers, parents and learners will also be able to see how students are taught at National Star. There will be experimental activities, video evidence supporting the work and the opportunity to discuss it with experienced practitioners.

Actress Sally Phillips – who starred in Smack The Pony and the Bridget Jones trilogy and fronted the BBC documentary A World Without Down’s Syndrome? – will be among the guest speakers. She waded into the emotionally-charged debate about a new screening test that is said to detect Down’s Syndrome in 99 per cent of pregnancies and explored the effect the test could have on society.

Discover more about FestABLE and book your tickets.