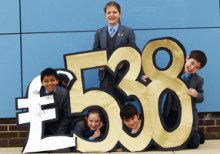 Children at The Richard Pate School turned back the clock to make a difference to the future.

The 303 pupils at the Cheltenham school held a charity day and raised £538 for National Star.

While the older pupils wore ‘home’ clothes, their younger counterparts dressed up as historical characters.

Headmaster Robert MacDonald joined in by dressing up as Henry VIII with the added accessory of inline skates.

‘We all set up stalls and raised money for National Star. We also had a cake sale,’ said Year 6 pupil Joe Cochran.

The children regularly use the pool at our Ullenwood campus.

They decided to raise money for National Star after student Josh Reeves visited and talked about what it is like to live with a disability.

‘We started coming up to the pool and we have become aware of the good work the charity does and we wanted to lend a helping hand,’ said Mr MacDonald.

‘On behalf of everyone at National Star we want to say a big thank you for the support from The Richard Pate School. We hope our partnership with the school will continue to grow,’ said Gill Henry, Head of Fundraising.