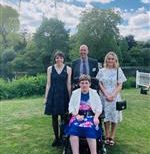 National Star tutor Richard Brand was honoured for his 30 years’ work as a co-ordinator for the Duke of Edinburgh’s Awards.

Richard and fellow staff member Lauren Shepherd, who are both based at Ullenwood, joined three National Star students at Buckingham Palace for the royal event.

‘My highlight was listening to Zoe giving the Earl of Wessex a long answer about on how she has developed and grown in confidence because of the DofE Award,’ said Richard.

‘When she had finished speaking the whole group clapped and cheered. It nearly brought a tear to my eye.’

Richard first went to Buckingham Palace in 1978, at the age of 18, to collect his own Gold Award.  He returned 30 years later with his son who collected his own award.

While he has been at National Star Richard has enabled more than 50 students to earn their Gold Awards. He was last at Buckingham Palace in 2009 with two National Star students.

He was invited this year in recognition for the work he has done with the programme.

‘To be invited as a special guest this year to attend the awards was an honour and to be able to see Lowri, Kathryn and Zoe accept their Gold Award was amazing on such a glorious day,’ he said.