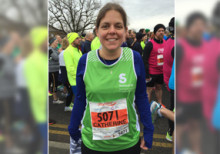 A woman who only took up running last September has completed her first half-marathon in honour of her late cousin and National Star.

Catherine Snow’s cousin Andrew Radley was born with Spina Bifida just three weeks before she and her twin sister arrived.

The trio, and Andrew’s older brothers Martin and Steven, grew up alongside each other, spending the holidays together and starting college at the same time.

When Andrew went to National Star College he loved it so much he decided to settle in Cheltenham after he finished. He died after a short illness last May, aged 36.

‘Andrew had to put up with an awful lot in his life, life was difficult because of his disability. His two big brothers made him who he was, a normal person.

‘All he wanted to do was to be like everyone else. National Star enabled him to do this. Not only did National Star enable Andrew to live as independently as possible, he continued to use the college until his death taking cookery, art and swimming courses. His life in Cheltenham was so important to him.’

Catherine, 37, a computational biologist who lives in Duxford near Cambridge, started running when her daughter started school in September and she had a free day.

‘I was spending my Fridays off eating cake and drinking coffee so I needed to do something with that time,’ she says.

‘I’m fit enough, I cycle and do circuit training but running is not my sport of choice. I started building up the miles and decided to do the Cambridge Half Marathon and thought it would be nice to raise some money in Andrew’s honour.

‘The Cambridge Half Marathon was a nice way to see the city, it’s very a pretty city and thankfully very flat. I made it in two hours eight minutes which I was pleased with.’

Andrew’s mum, Angela Radley, was always around for Catherine and her sister when their mum died when they were 21. She proudly supported Catherine’s efforts.

‘My Auntie Angie has always been there for us, she sent me really inspiring text messages and said I’d made her cry with what I’d said about Andrew. He was lovely.

‘My run raised about £565, which was £670 with gift aid. It’s nice to have done that so National Star can help other people live as full a life as Andrew was able to.’