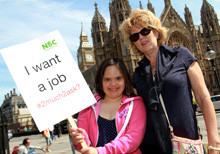 Yesterday more than 100 young people from across the country demonstrated outside the Palace of Westminster.

The campaigners, which included learners from National Star, wanted to raise awareness of the fact that, unlike their peers, young people with disabilities cannot simply go to the college of their choice when it comes to their further education. If the local authority does not agree with where they want to go, it will not provide the funding.

It took mum Sarah Gardner, from Wiltshire, 600 hours’ work, three hearings and three appeals to secure a place at National Star College for her daughter Megan who has complex disabilities and learning difficulties.

The family were on the verge of taking their case to court when the local authority agreed to fund Megan. They had even discussed re-mortgaging their house in order to pay for their daughter’s education.

‘Megan is a triplet and her two siblings can choose where they want to go college, but we had to go through two years of hell to do what we thought was best for her,’ said Sarah.

Mother Deborah Dommett has hired a solicitor to help in her battle to win funding for her 19-year-old daughter Sita to go to Foxes Academy in Minehead, Somerset. Both took part in the A Right Not a Fight demonstration yesterday.

Sita, who has Down’s Syndrome, wants to go to Foxes, a specialist college, because it offers a comprehensive catering course.

Their request to Gloucestershire County Council for funding has been turned down on the grounds that it believes Sita would be best left in her community of North Nibley, and that she needs no further education.

‘Why shouldn’t young people like Sita go to the college of their choice?’ said Deborah. ‘We’ve made our choice but she just can’t go. A specialist college has everything Sita needs to meet her needs and it is her chance to become independent. Why should it be such a fight?’

We recently carried out a national survey of over 1,600 families that revealed a staggering  87% of them have no idea how local authorities are making decisions about their son or daughter’s future.

‘Young people with disabilities simply want the right information about all of their further education options and they don’t believe they should have to fight for months to get into the college that best meets their needs and ambition,’ said Kathryn Rudd, our Principal of National Star College and chair of the Association of National Specialist Colleges.

‘They want an equal system – not one where you can only get access to some colleges if you are prepared to go into battle. These young people deserve more.’

Last year the campaigning students were told that the new Children and Families Act, which came into effect last September, would bring more rights for young people and their families, including greater choice to access the college that best met their needs.

But the reality is proving to be very different, said Kathryn.